Once when we lived in Florida, Daniel took me on a lunch date to this amazing Vietnamese restaurant where I ate some pretty amazing food. The plate/bowl was full of rice noodles, there was a bowl of broth with chips of pepper flakes, green onion and cilantro floating around in it, then there was meat and vegetables. The idea was to pour the hot broth over the delicious blanched vegetables and chow down. I could not believe how fresh and simply delightful it was to have the homemade warm broth douse the veggies and meat and create a totally comforting experience. The dish was called Pho soup. The broth had hints of soy sauce and the fresh herbs were one of my favorite elements.

The dish I have today is more of an easy week-night interpretation of the delicious authentic experience I had at that little Vietnamese place. It’s really more of a layered stir fry, but has all the flavors of the broth that I had eaten that day. The cauliflower works as a rice noodle similar texture and the whole dish overall is very comforting. It’s nice to step away from your average meat and roasted vegetable dinner on Keto and have a truly restaurant-type dish to mix it up!

I highly recommend drinking the broth that runs off from this dish as it has so many valuable nutrients that you don’t want to simply pour down the drain!

First, I started by marinating the chicken thighs in garlic and soy sauce while I cut up the other veggies and stir fried the onions, next I cooked the chicken and as you’ll see each layer of veggies gets their own delicious flavor, adding dimension to the pan.

Heat 1 tablespoon of butter on medium in a wok or large saute pan, add diced onion and cook, stirring occasionally for about 10 minutes. Meanwhile add a couple of tablespoons of Bragg’s to a bowl with the chicken thighs and then add about 1/2 tsp of garlic powder. One by one, cut them into cubes returning them into the marinade until the onions are finished. When the onions are translucent and maybe even browning a little, add the minced garlic cooking for about 1 minute before adding the chicken thigh cubes and the marinade into the pan and cook through until no longer pink. Once the chicken is totally cooked, remove it to a clean bowl or plate to await being reincorporated later. Add another tablespoon of butter, the mushrooms and the peppers. Sprinkle and saute in a pinch of salt and black pepper until soft but not mushy. Add on top of chicken on a plate or bowl and return your pan to heat. Add another tablespoon of butter and a small drizzle about 2 tsp of the sesame oil and then the cauliflower and about 2 tsp of Braggs. Cook until cauliflower is soft, but not mushy, then add all ingredients to the pan including the green onions, snow peas and the fresh cilantro stirring until the onion just starts to be affected by the heat, but is not wilted completely, about 5-7 minutes. 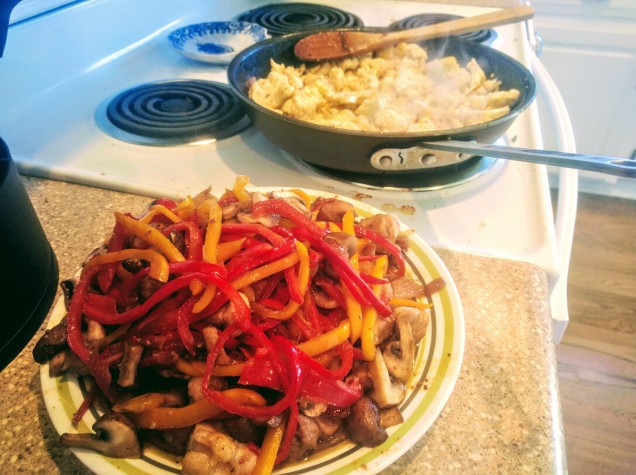